Operating After Suspension or Revocation of License 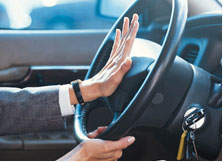 Pursuant to Massachusetts General Laws Ch. 90, Section 23, it is a criminal offense to operate a motor vehicle after the suspension or revocation of your license. Like any crime, to be convicted, the prosecutor must prove beyond a reasonable doubt that you were actually operating a motor vehicle, that at the time of operation your right to drive in Massachusetts was revoked or suspended, and that you had knowledge at the time you were operating of this suspension/revocation. If convicted, you face expensive fines and possible jail sentences. With each subsequent offense, the potential punishments become more harsh and can eventually lead to a revocation of your license.

The good news is that you don't have to face the legal system alone. Call the experienced, successful Boston traffic lawyers at Bellotti Law Group, P.C. today at 617-225-2100 for a free consultation.