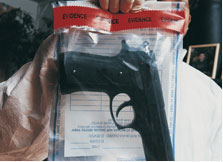 If you proceed through the proper licensing and possession channels and follow Massachusetts firearms laws, it is your constitutional right to own and carry a firearm. However, there are many complex nuances surrounding the law in the state. Firearms violations in Massachusetts are treated very seriously and can result in felony convictions, including incarceration and/or heavy fines. Contact the experienced Boston criminal defense attorneys at Bellotti Law Group, P.C. today to fight your case head on.

Pursuant to M.G.L. c. 269 s. 10, a person can be charged with carrying a dangerous weapon for a variety of reasons, including:

Largely depending on the circumstances of the charge, a lengthy jail sentence can result from a conviction under this statute.

Carrying A Rifle Or Shotgun On A 'Public Way'

A "public way" is defined as a street, sidewalk, or public grounds as maintained by the municipality or state. A person carrying a rifle or shotgun can be criminally charged pursuant to M.G.L. c. 269 s. 12D. Potential sentencing after a conviction is affected by many different variables, including whether or not the weapon is loaded, if it is considered a "large capacity" weapon, etc.

In some cases, if you are charged with a felony, pursuant to MGL c.265 §18B, possessing a gun during the commission of such felony can add an additional criminal charge and further potential repercussions. In most cases, whether or not the gun is loaded is irrelevant.

Even if this is your first charge, you will be facing a mandatory minimal sentencing of five years incarceration. A second or subsequent offense will likely result in many more years imprisonment, perhaps over 20.

This sentence is in addition to the felony you are charged with and cannot be reduced.

Pursuant to G.L. c. 140 s. 131L, "It shall be unlawful to store or keep any firearm, rifle or shotgun including, but not limited to, large capacity weapons, or machine gun in any place unless such weapon is secured in a locked container or equipped with a tamper-resistant mechanical lock or other safety device, properly engaged so as to render such weapon inoperable by any person other than the owner or other lawfully authorized user."

Your Second Amendment Rights Are Not All-Inclusive And Automatic

Most people know that the Second Amendment to the United States Constitution provides basic rights concerning the ownership and possession of firearms. However, owning or possessing a firearm without the proper license, or even failing to maintain or store the firearm properly, can often result in felony charges that carry mandatory minimum sentences and driver's license suspensions.

If you have been charged with an offense related to firearms, call the Boston criminal defense attorneys at Bellotti Law Group, who have decades of experience successfully defending firearms charges. Our Boston, Cambridge, and Quincy offices can be reached at 617-225-2100.

Our Experience Makes The Difference

Some of our criminal defense lawyers have extensive backgrounds as state prosecutors, so we are not only familiar with the laws surrounding firearms charges, but also know the tendencies of the different offices of District Attorney throughout the Commonwealth. Because firearms ownership and gun violence are hot political issues in today's world, you need a criminal attorney who knows how to deal with law enforcement officials and prosecutors who often look at cases like these as their opportunity to set an example. This makes these cases all the more dangerous for defendants.

Even if you have a Firearms Identification Card ("FID") but lost it or do not carry it with you, you can sometimes be charged with being in possession of your weapon without the FID card. These are serious cases that are almost always charged as felonies. Contact a criminal defense attorney at Bellotti Law Group, who knows how to successfully avoid these potentially life-changing charges.

Moreover, you can sometimes be charged with possession of a dangerous weapon for items that may not be obviously unlawful, such as daggers, knives and martial arts weapons. Sometimes police charge for possession of an item that actually is not unlawful.

The criminal attorneys at Bellotti Law Group, P.C. know how to investigate your case, prepare your defenses, and communicate with you about your options. We have offices in Boston, Cambridge, and Quincy and serve the entire Commonwealth of Massachusetts and Southern New England. We are ready to help you. Contact us today.