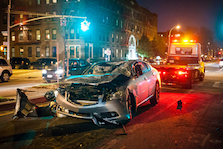 If you have been injured in a car accident as a result of someone else's negligence, Bellotti Law Group, P.C., can help you obtain the compensation you require and deserve, so that your medical bills are paid and your peace of mind is ensured.

For over 20 years, the Massachusetts car accident lawyers at Bellotti Law Group, P.C., have successfully brought claims on behalf of individuals injured in auto accidents. We are experienced at obtaining the police evidence and medical records, then making your case to insurance companies and in a courtroom.

In Boston, there are an average of 100 people that sustain serious injuries from car crashes. 500 to 1000 people have minor injuries each year in the city. Around 4,000 car accidents that occur in Boston each year are reported as causing “unknown” or “possible” injuries.

Most importantly, car accidents are not evenly distributed across the city of Boston. There are many locations that appear to have more car accidents than others. Data from MassDot illustrates the high volume of car accidents in there specific areas:

If you are a seasoned Boston-area driver, you probably already know that locations that have the high potential for accidents are concentrated at the merges and splits on I-93.

In Massachusetts, car accidents are often the result of:

If you have been injured in an auto accident, contact an experienced Boston motor vehicle accident lawyer at Bellotti Law Group, P.C., today to learn your rights. Be aware you may face a statute of limitation for how long you can file a claim.

Contact the Massachusetts traffic accident attorneys at Bellotti Law Group, P.C., today at 617-225-2100. We are conveniently located in Boston, Cambridge and Quincy. Be sure to have any paperwork you have ready when you call. You can also use our contact form. We will respond promptly.