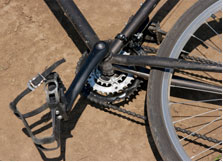 In Massachusetts, if you have been injured by a negligent driver, you may be able to obtain financial compensation. You may also be able to seek compensation if a family member has suffered a wrongful death in an accident. It is important to seek immediate medical treatment and a legal consultation with a Boston bicycle accident lawyer to determine your rights.

Bicyclists are at a disadvantage on the roads. Motor vehicle drivers often do not watch out for them or understand the cyclist's rights under the law. When there is an accident, the bicyclist can be expected to sustain the more severe injuries, which can result in substantial medical bills and time away from work.

Bellotti Law Group, P.C. has been successfully representing injured cyclists in Massachusetts for more than 20 years. We are experienced at making your case to insurance companies so you can focus on recovering from your injuries.

If you have been injured in Boston or beyond, the bicycle accident lawyers at Bellotti Law Group, P.C. can help you determine your rights. Our offices are conveniently located in Boston, Cambridge and Quincy. Contact us today at 617-225-2100 to discuss your personal injury claim.

Bicycling has greatly increased in popularity in recent years in Massachusetts, a combination of government efforts and a desire among the public to avoid traffic congestion and support environmental-friendly efforts. Recently, the League of American Bicyclists named Massachusetts the third most "Bicycle Friendly State."

In Massachusetts, cyclists are allowed to travel anywhere motor vehicles can. Some communities offer some bike lanes or sharrows (shared lanes), while in others, cyclists travel along the right side of the road or in the traffic lane. Cities with substantial cycling populations include Boston, Cambridge and Somerville, but in recent years, many suburbs have increased cycling opportunities by developing off-road bike paths. Some of these trails include the Cape Cod Rail Trail, the Upper Charles River Trail in Milford and the Assabet River Rail Trail in the Marlborough area.

Massachusetts cyclists have all the same rights as motorists, with a few differences. Some of the basic ones concern where a cyclist can travel and how drivers can pass them.

Cyclists are allowed to pass traffic on the right, but motor vehicles cannot. Motor vehicles must also have sufficient space to pass a cyclist traveling in the same lane.

Wherever you are located or were injured in the Boston area, we can help you secure compensation for your injuries.

What To Do If You're In A Massachusetts Bike Accident

Bike accidents can happen for a number of reasons, including a bicyclist's own error, defective roadways or a driver's negligence. Drivers can operate negligently by speeding, tailgating, failing to stop at traffic lights or stop signs, operating under the influence of alcohol or drugs, texting while driving, talking on a cellphone and other reasons. Injuries can occur on the road, but also when cars back into parking spaces or occupants open the door without looking and strike bicyclists, a practice known as "dooring."

Speak to a Boston bicycle accident attorney if you were in a bicycle accident. You may have serious injuries, including broken bones, a concussion or internal injuries. Even if your injuries are not visible, it is important to seek medical treatment immediately.

If you are involved in a bicycle accident resulting in over $100 in damage or personal injury, you must report it to the local police department. You can do this on your own, or contact an experienced bike accident lawyer to help you.

If you have been injured by a motorist, Massachusetts law provides you up to $8,000 in personal injury protection (PIP) benefits for medical bills and lost wages. If the driver was negligent, you may be entitled to additional damages. It is important to learn your rights because you may be unable to work for a period of time.

The Massachusetts lawyers at Bellotti Law Group, P.C. can help you determine your rights. Contact us today at 617-225-2100 or use our online contact form.

Practice Areas
Boston Injury Attorney Blog - Bicycle Accidents
Client Reviews
★★★★★
I just want to thank Attorneys Peter Bellotti and Karen Nadeau. I was injured in a car accident in 2011 and really appreciate the care and attention they gave my case. I highly recommend anyone who has been injured to contact Peter and Karen at Bellotti Law Group. Honestly, the whole law firm goes above and beyond… You won’t be disappointed by calling Peter and Karen at Bellotti Law Group. Connie Talley
★★★★★
I’ve known the attorneys at Bellotti Law Group for over 10 years… I have highly recommended them to family and friends for many years and everyone was exceptionally pleased with the firm… A few years ago, I was facing my own injury after a serious car accident on Route 495 in my SUV and didn’t hesitate to call Attorneys Peter Bellotti and Karen Nadeau at Bellotti Law Group… The settlement was very substantial and my wife and I were very grateful we went with Bellotti Law Group. Charlie Ryan
★★★★★
My experience with Attorney Karen Nadeau (a fantastic attorney) and her colleagues at the Bellotti Law Group was exceptional and greatly exceeded my expectations. After I was injured on an amusement park ride while on vacation with my husband and children, I felt overwhelmed… In the end, the final settlement was much larger than I anticipated. The peace of mind and security that Karen provided meant a lot to me. I highly recommend her firm for their professional, compassionate, and proactive standards. Mary Mack
★★★★★
We went to Bellotti Law for help with a car injury to a pedestrian in a hospital parking garage. Peter and Karen are very low-key and calm, but know well how the system works and got us an excellent setlement through persistence, and helping us to track the effects of the injury and its future potential effects. They made a very strong case, and held out for a great settlement… I highly recommend them for their calm persistence, intelligence and experience in personal injury cases. Paul Farrell
★★★★★
I found this law firm by doing a Google search for personal injury. I spoke to them and they took my case, they were very attentive and accomadating. As my case was winding down there was constant communication I never felt that I had to call and check on anything. I had a wonderful experience. Charisse Moore
Submit a Law Firm Client Review